Saffron Seniors get ready to graduate, now my class moves up to top position in the club.

After school I had to go to gym detention. Did exercises for an hour and was so tired I went home and set my hair for the Saffron meeting. We had elections. Marilyn is now President, Sandy Vice President and I’m on the disciplinary board. We had a party for Seniors and after had a cake. We gave them orange and white corsages, It was sad. We went to Fosters after. Jack and Gary were there. Dave didn’t come. Jack noticed I cut my hair. Dale said Dave said I was too old for him. I guess Jannie told him I said he was a child. He probably hates me now. 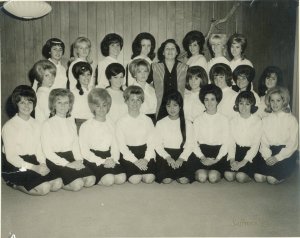 Saffrons Seniors on the bottom row are graduating and my class, the second row would now be the Senior Saffrons.  Next September we will pledge the new crop of Saffrons.