I have an Audition at M.G.M… I better get well fast…

Was so sick this morning, but forced myself to get dressed and go to Summer School. I felt sick when I got there. Then after school Sandy, Dianne and I drove to Toes. Howard was there. He took one of my Saffron Pictures and acted overly friendly for some reason. Dave was there too. But Bryan and Jack weren’t. We went to Tops and Bottoms and exchanged the bottom of my bathing suit, than went to the Flying Jib. I had a hamburger and fry’s as usual. I came home and threw it all up. Now I’m really on my way to being sick.

Mrs. Launderville called, she’ got an audition for me at MGM. I am going to do a scene from “Our Town.” Mike Dinners will do the scene with me. We’re to do it July 17th. I’m to see her Monday at school. Sure hope I’m well by then. Also, the school called and said I’ll have to give up Summer School if I’m not there Monday.

“Our Town” presents a long-gone way of American life and is generally known as a work that is meant to be presented in a theater with very little scenery. 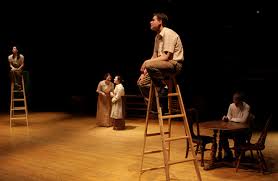 It is one of my very favorite plays, and I had done it many times in acting class.  There is very few props, but the audience get’s lost in the story and never misses fancy sets.  I bet I get well in record time so I don’t miss this opportunity.