Stuffing 11 Pledges in the back seat of Sandy’s car, kicked off Saffron Hell Week in 1964

Today I wore my black wig in a new style and this convinced a lot of people it was real. After school, Sandy my sister Donna and her friend Linda K. and I went to Woodies for dinner, than to a Saffron meeting. We had 11 kids in Sandy’s car. All of the Pledges piled in the back seat. Kid’s got their Pledging rules and Pledge Mother, Edna P. Mrs Quartia our Saffron Sponsor, didn’t like my hair, she likes the ponytail!  We all went to Fosters and everyone was talking about my hair…some people found out it wasn’t real. Then, we took the kid’s home and went to Toes. What a shock! We saw Dave Kendal and he looked sooo bitchen!! Donna and Linda were stoked over him. He was shocked to see my hair. He’s now living back at home. He left before I could tell him it’s a wig. Now he thinks I’m ugly. 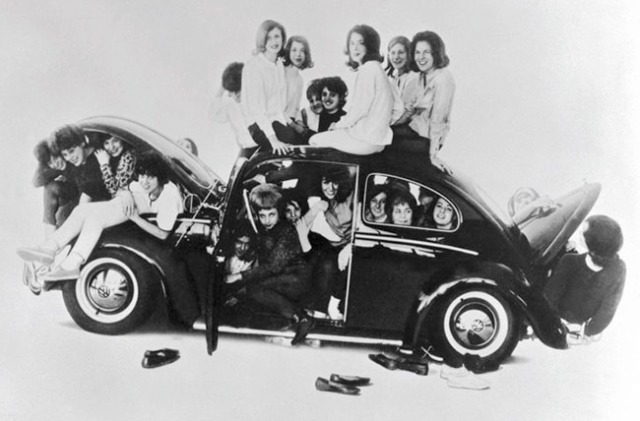 It was a popular prank to see how many people you could stuff in a car or phone booth in the late 50’s and early 60’s.  It was a joke, like being in a Clown Car.  No seat belts or rear view vision, just screaming,  laughing girls cramped in the back seat, with the radio blasting as loud as possible.

Be sure to drop by my Maybelline Book Blog at http://www.maybellinebook.com/