SEXPOT, some guy called me and I was highly insulted!!!

My sister Donna and I went to Toes, but nobody was in a good mood. In fact they hardly noticed us. Howard asked me what I was doing tonight. Phil said there might be a party at Toes. Pearl and I took Donna and her friends Teri and Jerry to Surf Films in Hermosa Beach, but they were sold out, so we cruised Fosters. Some guy called me a sexpot. I never got over it. Angie Kamola and Bonnie Cavaliere were there. They just came from a Wedding. We cruised my 57 Chevy to Toes and Howard was there, but there was no party. He asked what I was doing tomorrow night. I said nothing, so he said he’d pick me up at 7:30 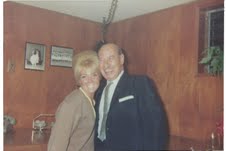 Here I am with my great uncle Ches Haines.  Notice my Saffrons Pictures on the wall.  I guess I liked being a sexy Barbie Doll, but nobody had ever called me a sexpot before.  I never looked or dressed cheap.  I did wear heavy eyeliner and pale lipstick like the style dictated in 1964 and I guess Playmates of the month, in Playboy Magazine, had a similar look….  That’s probably why Howard was buzzing around me again.

This was the Sexy Barbie Look I was going for.  Would you call that a SEXPOT…

Be sure to visit my Fabulous Maybelline Blog at http://www.maybellinebook.com/