The Westchester California band was known as the Crossfires in 1964, before becoming The Turtles.

August 29, 1964, Saturday. I was with Howard and was at the dance with the Crossfires in Westchester.

Was sick all day, but finally went to our family friend’s the Whieler’s for the night. I went to the dance with Pearl… Sandy’s brother, Steve Block called me to go out with his roommate, but I couldn’t leave Pearl. We left about 8:30 and got to the dance about 10:00. I got the address mixed up. There were so many people there. Some guy’s asked us to have coffee with them. Rose said Howard was there, so I wanted to leave, but Al came out with him. The whole gang was with him, Byron, Nile’s. and everyone… Howard almost got in a fight because this drunk guy was bothering me. He and Al took us to Canter’s for coffee. It was fun. But we fought the whole time and he almost broke my arm. He had a terrible cold and felt sick. So did I. Was with him until 12:30.

The band, originally a surf-rock group called the Crossfires, was formed in 1965 (really it was in 1964, ) in Westchester, California, by Howard Kaylan and Mark Volman. With the help of DJ and club owner Reb Foster, the Crossfires signed to the newly formedWhite Whale Records and soon became the Turtles.

the Turtles achieved breakthrough success with a Bob Dylan cover. “It Ain’t Me Babe” reached theBillboard Top Ten in the late summer of 1965, and was the title track to the band’s first album,

Mark Volman, the fat turtle, was good friends with Howard and Byron and I often went to dances in Westchester where they played.  Wikipedia say’s they were formed in 1965, but they were known as the Crossfires in 1964,  just in case you wanted to know the real history of the Turtles. 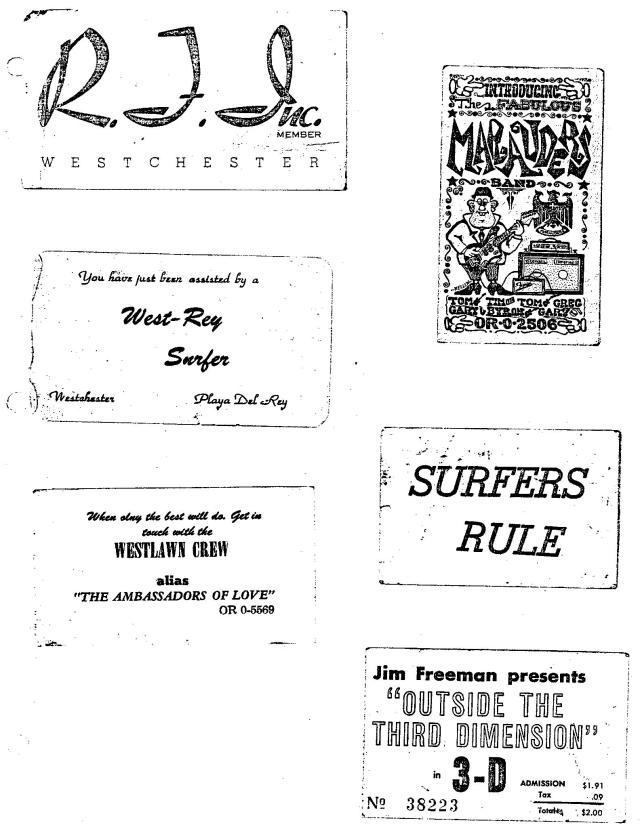 When a Surfer met a girl in Westchester for the fist time, they’ed give them their business card.  I had a stack of them, some with phone numbers included.  Which was a good resource for my famous prank call parties.

Be sure to stop by my popular Maybelline Book Blog at  http://www.maybellinebook.com/