Laid out in the sun, it was 97 degrees. Tried to get my face tan. Sandy Block came by and we took my sister Donna and her friend Teri to the beach with us. Sandy couldn’t believe I cut my hair and was happy, because I no longer had long blond hair. When Donna told her it was a wig, Sandy just stared at it and was sick! Sandy, Pearl and I went to Toes. Everyone was at Gary’s, but Sandy was too scared to knock on the door. We went down t the water, than left. I was sad, because I wanted t see if the boy’s would know me. We went to Sandy’s and ate over. Went home and took clothes t the Laundromat, because our dryer broke today. 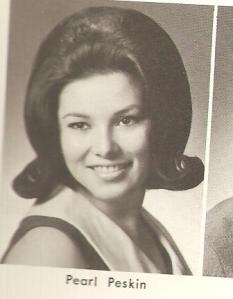 Pearl and Sandy were both beautiful brunettes with olive skin and dark eyes. They never considered going blond, because dark hair and makeup suited them.  I had pale blue eyes, blond lashes and brows, and fair skin with freckles, so the dark wig didn’t fit my coloring.  I think Sandy was happy when she thought I was no longer the cute blond with a long ponytail, because as a brunette, I wasn’t be as stunning as she was.  After all, she was very competitive and won the Miss Culver City Contest, after I was disqualified for being a professional actress.

Drop by my Maybelline Book Blog at http://www.maybellinebook.com/