The Shangri-Las record, “Leader of the Pack” inspired my play, “The Littlest Ho-dad”

We got to the Hall at 9:15 and started rehearsing for the Play. We never even had the Characters cast before! And, we only went through it once, while I finished making the costumes. I prompted the kids, up until the last minute. We went on with a wing and a prayer and I knew it was up to me to carry the show… It was what you call impromptu… But, when I came out in a black leather jacket, pantaloons and my dad’s painting shoes, the people just screamed. I was such a ham. Just give me an audience and I’ll make the biggest fool of myself.  My costume was what made the show. Daddy’s big paint stained shoes, boxing gloves, daddy’s dark glasses, his hunting hat, red and blue socks and a black leather jacket over my pantaloons… covered in an angel robe and a halo. People said it was a real success. The Littlest Ho-dad and Walking Ugly are my two best Plays. My sister Donna, was in charge of putting on the record, “Leader of the Pack” and she blew it by scratching it while it was on full blast, but, that was one only mistake. It really made my Christmas, to pull this off! 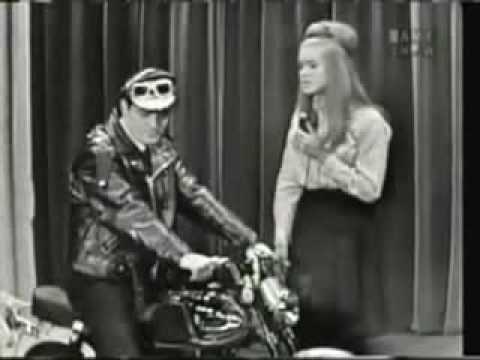 In 1964, the Shangri-Las did a spoof on TV, of their hit song, “Leader of the Pack. ”  It was about a biker who get’s killed on his motorcycle after his girlfriend breaks up with him.)  I thought the spoof was hysterical and it gave me the idea for the “Littlest Ho-dad”… I took the ending of the song and made it into a funny skit about what happened when the biker arrived at the Pearly Gates of Heaven and Saint Peter turns him away, until he discovered the Ho-dad, had a Heart of Gold.

Shangri-Las – Leader Of The Pack – 1964The game show “I’ve Got A Secret” featured the Shangri-Las (w/Robert Goulet.) at the time when “Leader of the Pack” was the number one record in the USA.

Why don’t you come up and see me sometime at my Maybelline Book Blog http://www.maybellinebook.com/