Last day of school. Next week is Easter Vacation. We’re all going to Crestline Tuesday With the Saffrons. Talent Assembly was good. Butch M. sang “Money” with the Esquires. After school we went to the bank with Lauri. Tonight I went to Palisades High with Jackie. There were nine kids in the car. It was tough! I danced every dance and forgot Howard. I was having so much fun. All the boy’s kept pulling my hair, they didn’t believe it was real. I was dancing with this this boy who gave Windy Overbach the finger. They started fighting. Windy beat him so bad the guys face was covered in blood. They were going to kick the Culver kid’s out cause we wore Capris and because we cause so much trouble.

The Beatles, Money That’s What I Want 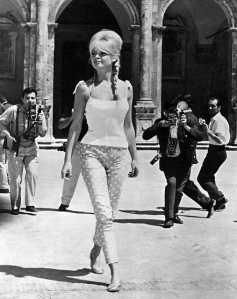 Brigitte Bardot was the look I was going for in 1964 and almost got kicked out of the dance because of it. Notice I copied Brigitte Bardot’s hairdo as well. 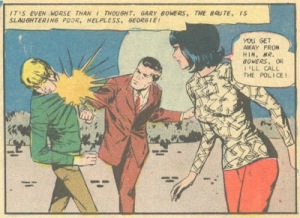 Windy Overbach starts a fight at the dance

Step on over to my Maybelline B00k Blog http://www.maybellinebook.com/