After school I came home and went swimming for two hours. Went to a Saffron Meeting at Linda Klein’s and put Pledges in a room with a tape recorder to hear what they were saying about us, then gave them a lot of trouble. After the meeting, Sandy and I took my sister Donna, Linda Klein, Dianne Speewack and Geri to Tiny Nailor’s, and The Trees, in Play del Rey, but nobody was there, so we went to Toes. We made the girls go to the Fraternity houses and beg for cigarettes, (looking so ugly with no makeup on.) They looked about 13, but they got the cigarettes… Took them to Gary’s, Rick was there drunk, but the girls said he looked bitchen.  Then took them to Jack’s and he was home. Sandy almost went nuts, because he looked so darling…he gave cigarettes to the kids. Sandy wants me to call him…..How can I tell her I like him too.

For Saffron Hell Week, Sandy and I made the Pledges knock on Jack’s door just to see him answer it. They looked about 13, with no makeup and their hair down, wearing some old clothes and and begging for cigarettes. 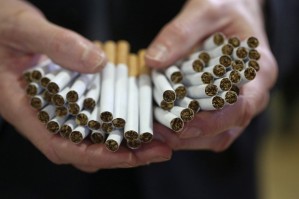 The Pledges collected a lot of cigarettes from the Fraternity houses and from Jack.  I never smoked, but a lot of the girls did, so we brought the cigarettes to the next Saffrons Meeting and gave them away.

Be sure to stop by my Maybelline Book Blog at

2 Responses to Saffron Hell Week, Pledges had to beg UCLA Fraternities for cigarettes